With government reforms gaining traction, Myanmar is increasingly becoming an attractive place to do business, the country’s finance minister has told an international investment forum.

Speaking to hundreds of local and foreign business leaders at the opening of the 5th Euromoney Myanmar Global Investment Forum in Nay Pyi Taw on September 13, Union Planning and Finance Minister, U Kyaw Win said Myanmar had only just begun to open up to the world.

“Both politically and economically, I believe that 2016 could be a transformative year for Myanmar,” said the minister. “Economic development is linked to the political measures that are being undertaken to achieve national reconciliation and peace in the country.”

The country has learned from its neighbours, U Kyaw Win said, and was embracing an economic policy of strong and inclusive growth across the nation while ensuring a path of environmental sustainability.

Myanmar was opening up to trade, encouraging foreign investment and strengthening its financial sector, the minister told the crowd of business representatives.

Foreign investment began to enter the country following the political and economic reforms introduced by the previous government elected in 2010, after decades of military rule.

U Kyaw Win said that foreign firms were eyeing the progress of the new government closely and investment would flow with the implementation of its new economic policy.

“In shaping an enabling business environment for private-sector development, a series of reform measures is being undertaken in the investment arena,” he said. “Improved legal and regulatory frameworks will create a more favourable investment climate in Myanmar.”

Under the new legislation, investors will be granted different levels of exemption depending on the type of business and its location. In addition, the new law will allow the MIC to delegate power to regional authorities to approve domestic investment with a view to creating job opportunities and spurring regional development. The process of granting approval for some projects would also be streamlined.

Just 30 percent of the population has access to electricity, he said, adding that the government wants to achieve 100pc connectivity by 2030, which will require “massive” investment into the power sector.

Ken Tun, CEO of the Parami Energy group of companies, said the forum put foreign investors on notice that Myanmar would provide them with improved regulatory frameworks, transparency and good governance.

“If the forum presents foreign investors with a positive impression, investment will definitely increase – perhaps more than we expect,” he said.

Yanis Boudjouher, director of Infra Capital Myanmar, said the new government will need to get their policy mix right because competition for foreign investment was intensifying across the region.

“Investors are very volatile. They can move anywhere – Thailand, the Philippines, Myanmar – depending on where they can find the most favourable environment.”

The country was now more open to private-sector investment, but there was work to be done to encourage investment into large projects, said Edwin Vanderbruggen, partner of VDB Loi.

“The government needs private-sector help in public infrastructure,” he said.

Speaking on the conference sidelines, U Aung Naing Oo, director general of the Directorate of Investment and Company Administration, said that approved foreign direct investment for the year should reach about US$1 billion by September. This is well below this financial year’s estimate of $6 billion, but was to be expected during a year of leadership transition, he said.

Despite the under-performing FDI numbers, this year’s forum marked a sign of growing interest from international investors, he said.

“The forum drew more attention from international investors than last years because the topics are more practical and related to investments that are needed in Myanmar,” he said. 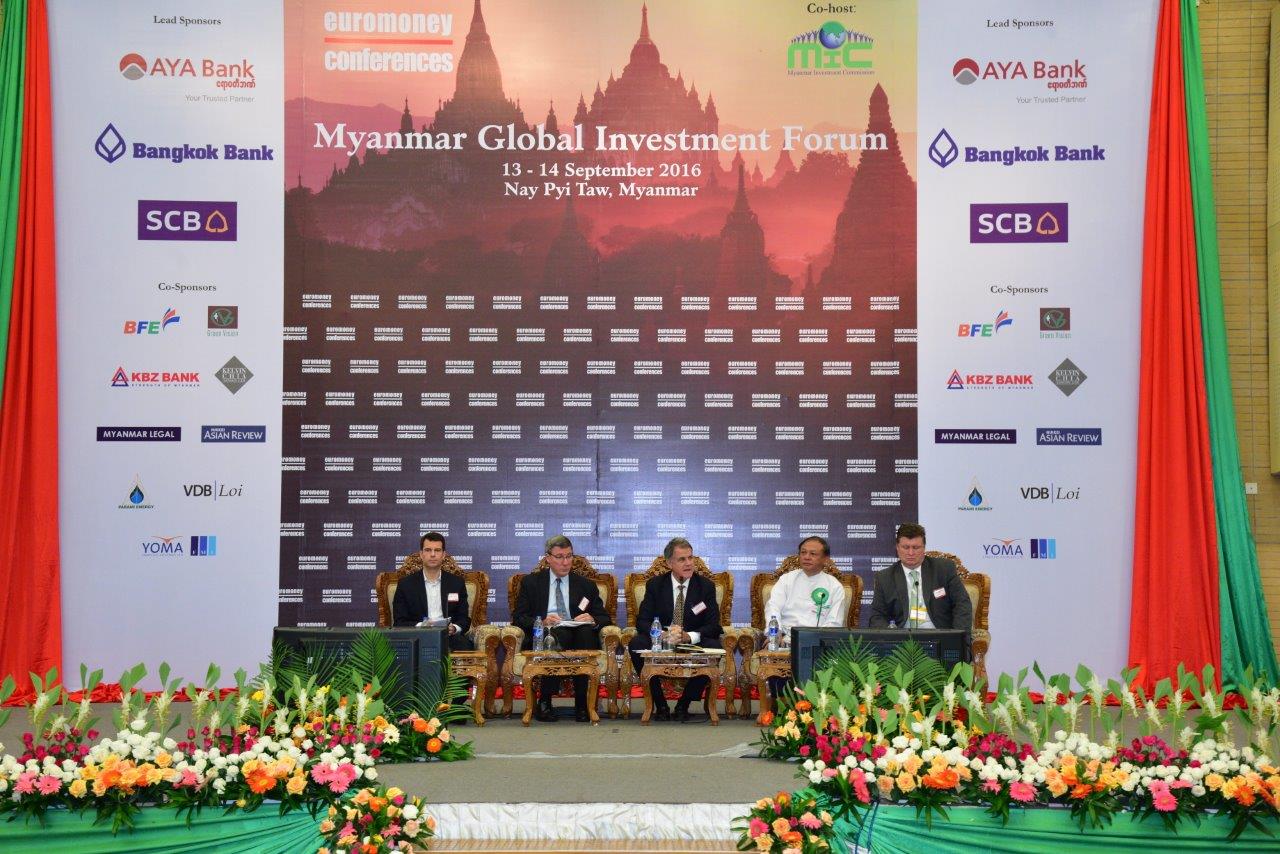 Yanis with fellow speakers on Infrastructure Connectivity and Industrial Capacity